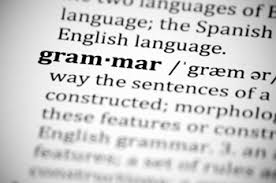 Time for some grammar.

Now when I say that the word Christian is used far too often as an adjective, I realize that when we actually have conversations in churches, with fellow believers, about the Christian life and so forth that we will use the word in that way. So I don’t mean to make too much of my point in a literal sense. In some respects, it’s important that we use it as an adjective. For instance, Christian theology and Islamic theology are not the same thing.

But what I have a problem with is the degree to which it represents a particular and problematic approach to and relationship with our surrounding culture. I think that it’s an approach based in part on fear and suspicion. And I think as a result it can isolate us from our neighbours, the very people to whom we’re supposed to witness.

First, our use of the word Christian as an adjective reflects how we have a Christian version of almost everything available in the secular world, especially in the entertainment world. Not that this should surprise us. If we consider music, for example, someone who performs hip-hop, speed metal, or pop music will, if they are or become a follower of Jesus, will probably express their faith through their song-writing. What creates the problem is when we create a category of Christian hip-hop as an alternative so that we don’t have to engage with the music of our popular culture. It’s safer for our kids and puts parents’ minds at ease.

Now I should say as a parent that a part of me understands this instinct. There are movies and television shows, because of their gratuitous content, I will not allow my children to see. And there is even material that needs to wait for an appropriate age. I wouldn’t let even my oldest watch The Lord of the Rings. I might let her watch Raiders of the Lost Ark, but I wouldn’t think of letting her see Indiana Jones and the Temple of Doom, which is a much darker, more frighteningly violent movie.

Of course, Christians haven’t been making contemporary pop and rock music and films for nearly as long as the rest of culture. There’s a learning curve, not to mention the fact that most Christians making movies have shoestring budgets, certainly compared to the movies coming out of Hollywood. There are a lot of great (and here I go using it) Christian song-writers, bands, and artists. Unfortunately, while they are getting better, Christian filmmakers haven’t fared nearly as well.

Another reason using the word Christian as an adjective is problematic concerns the purpose of art, of music, film, and other products of the human imagination. Why write songs? Why paint? Why tell a story for the big screen (TV or movie)? By attaching the adjective Christian before the words song, film, book, or poem, we give the impression in our culture that the sole purpose for the piece of art in question is to witness to the gospel of Jesus. Art becomes a means to an end. And that end is exclusively evangelistic. So in a Christian film, there has to be a scene where someone does a gospel presentation to one of the characters. Makers of these films haven’t quite reached the point where they are free to trust the characters and the narrative; instead, they become more overtly didactic, or “preachy.”

And if we think of an artist who produces music for the sake of evangelism, they will potentially lean in the direction of producing music that artistically represents the lowest common denominator. Like top 40 radio, the bulk of the content will be designed to reach as many people as possible even if the product ends up much more derivative and bland. Music that is more idiosyncratic or unusual or that attempts to be more experimental is much less common.

There was a time in the CCM (Contemporary Christian Music) industry when the joke was that you had to have so many JPMs (Jesus per minute). Songs not only had to be written by a Christian but had to be about Christian stuff. While this was often done in order to make sure that the music was bearing witness to the Christian faith, the result was a ghetto of Christian music in which the artists were by and large singing to the choir. Who outside the confined and confining circle of CCM would actually hear this music?

Take U2 for example. Are they a Christian band? Depends. Depends on who you ask, that is. Some are adamant that these guys are wolves in sheep’s clothing. Others are vehement that U2 rank just below the 12 apostles. No doubt, as it often is, the answer is somewhere in between. Like it or not, they’ve written and recorded numerous songs in which they are explicit about their faith, and songs on subjects seen through eyes of faith. What would qualify them as a Christian band to their detractors?

I also think of Christian band Jars of Clay, whose music isn’t always obviously Christian. It’s not unChristian; but their songs don’t always make their faith explicit. Speaking about the CCM industry and their own attempt to reach beyond its boundaries, lead singer and lyricist for the band, Dan Haseltine, wrote this on a blog post in the lead up to the release of their most recent album, Inland:

“Our particular style of writing and the perspective that we have written from has not been an easy fit into an artistic community that has such a massive agenda and only a single idea of how that agenda gets accomplished. I don’t fit there. I may have at one point. I did grow up as a youth group kid wearing a t-shirt with a picture of Jesus on it. I did drive a car with a “Christian” bumper sticker on it.”

In a later post discussing the relationship between faith and art, Haseltine says this:

“Jars of Clay has been called a “Christian” band for a long time.  It has been truer in some years than others to what people believe that label actually is.  We have chosen the title and despised it in equal measure. I honestly have never encountered a more vague and misinterpreted label so subjective in its usage to be deemed utterly useless in the public forum as the label, ‘Christian.’”

Using Christian as an adjective is, lastly, also significant with respect to how we self-identify as people of faith and identify other people of faith. Is it because of their character? Is it their life of prayer and how they pay attention to Jesus’ admonitions to love the least of these? Is it because they always carry a Bible or is it because they actually study the Bible and then apply it? Or is it because of all their Christian accessories? Because that’s what this is about. Faith as accessory. Jesus as a slogan. Christianity as a product. Advertised and bought and sold. The Jesus’ fish serves the same purpose as the Nike swish.

Holiness, love, grace, reconciliation are the marks of Christian identity. If only those of us who are Christian were more robustly so, using the word Christian as an adjective would be unnecessary. It would be enough to use it as a noun. This is also the case for objects of artistic expression. Whether or not a given song, for example, is Christian would not depend solely on the lyrics to the song but on the character of the song-writer. As I said, the better and stronger the noun, the less useful and necessary the adjective. Especially when it comes to the word Christian.

Greetings! The most important thing about me is not first and foremost about me. It’s about the person of Jesus. I receive my identity, my purpose, and my very breath and life from Jesus. Colossians 1:16 says it well. Speaking of Jesus, there the apostle Paul writes, “All things have been made through him and for him.” Who I am, I am because of who he is. And because through him I have been reconciled to God, I now live to orient my life around him. I don’t always do this very well. So I’m grateful for the good news of God’s forgiveness. Since August 2002 I have been married to a beautiful, wonderful Christian woman. Because of her, my life has been much more of an adventure than it would otherwise have been. She’s loving, smart, funny, determined, and real. Being her husband is a privilege and a joy. And our joy has multiplied. We have three children. One girl and twin boys. They’re fun, silly, energetic, smart, and exhausting. All unique individuals, they keep us on our toes. Thanks to them, our home is filled with a lot of laughter. We also have two dogs: a 10-year old mixed poodle-terrier named Sneaker and a 1-year old yorkie named Izzy. On top of all this, God has also called me to be a pastor. Our church is a small, rural church filled with loving, faithful people. Working with them to live out the good news of God is a great gift. What else? Well, I happen to like the following things (in no particular order of favourites): playing guitar, writing (obviously!), reading (theology, classic fiction), a variety of movies and TV shows but especially those in the sci-fi/adventure/fantasy/super-hero genres, Dairy Queen Chocolate Extreme Blizzards, buffalo wings, salsa, Doc Martens, Grip6 belts, and Birkenstock sandals. I love my children’s laughter and my wife’s smile. And I love that God — in his abundant grace — allows me to enjoy any of these things. There. Now you really know me. I hope you enjoy and get something out of reading my blog. I’d love it if you made some comments on a post or two. Normally, I usually post several times a week. Though occasionally I can go as long as a week or more without doing so. Fear not! I will post again! Peace, Pastor Derek View all posts by Derek Melanson